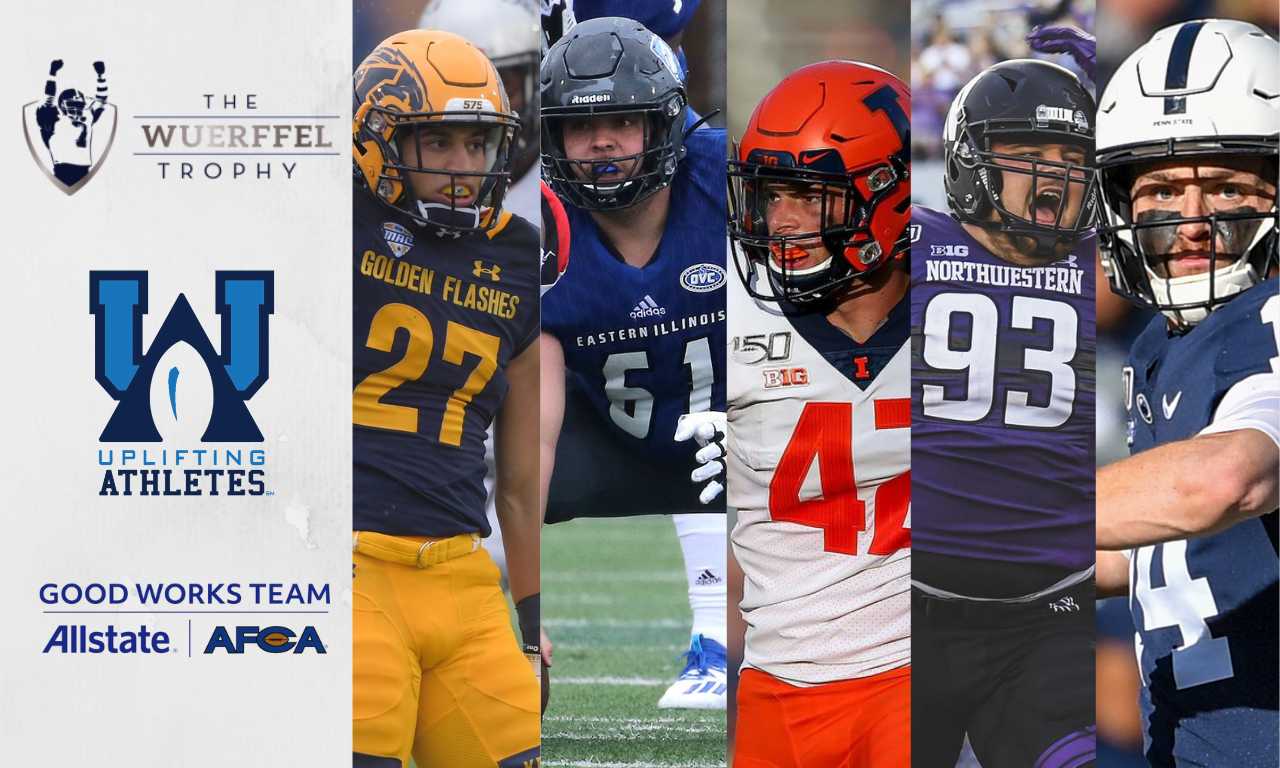 Established in 1992, the Allstate AFCA Good Works Team recognizes student-athletes stepping up to help others and to spotlight some of these remarkable stories that often go unnoticed. It is one of the most coveted community service awards in college football.

The Wuerffel Trophy honors college football’s most impactful leaders in community service and is presented to the FBS player who best combines exemplary community service with leadership achievement on and off the field.

Uplifting Athletes is proud to work alongside several of the incredible student-athletes nominated from our chapter network for the work they are doing using their platform to help, inspire and serve others.

From the beginning of his Penn State career, Clifford made the rare disease cause a priority by stepping into a leadership role for the PSU Chapter. After two years attending the Leadership Development Conference, the Nittany Lions starting quarterback took over as the PSU Chapter President in 2019 after a year serving as the Vice President.  During his leadership tenure, Clifford helped raise $150,000 and used his platform to publicly and openly raise the awareness bar for rare diseases.

For the Marchese’s, being an ambassador for the Rare Disease Community is a family affair. Michael is the third member of his family to serve in a leadership role after his oldest brother Joe was the Maryland Chapter President and older brother Jimmy was an Illinois Chapter leader. Michael has played an instrumental leadership role for the Illinois Chapter, helping to guide them through a coaching change and securing the ability to keep rare diseases a priority for the Illini program by holding a Lift For Life in 2021.

While some initial steps had already been put in place to form a chapter at Eastern Illinois when Solomon stepped into a leadership role, he showed his value as a leader and commitment to the cause by completing all the necessary final steps to assure Eastern Illinois officially became part of the Uplifting Athletes chapter network. He showed his high level of commitment to the rare disease cause by making sure EIU could wear helmet sticks for its game on Rare Disease Day in the spring of 2021 and played a vital role in the EIU Chapter holding a Lift For Life this year as well.

For more than three years, Spivak has served the Rare Disease Community in a variety of ways on many different levels. He’s been a Northwestern Chapter leader for three-plus years, helping guide the Wildcats through several fundraising and awareness events. He’s been an ambassador for the cause using his platform to share why rare diseases matter and are important to him. And he’s developed relationships with the Rare Disease Community that have evolved into deep and meaningful friendships. For his passionate work to help the cause with purpose and intention, Spivak was named to the 2020 Uplifting Athletes Rare Disease Champion Team.

Vance had a direct connection with the rare disease cause through former teammate Antwan Dixon - a rare disease patient. When Dixon transferred out of Kent State following the 2019 season, Vance was committed to keeping the Rare Disease Community a priority for the Golden Flashes program by stepping into the leadership role of Chapter President. A member of the NCAA Division I SAAC and Division I Football Oversight Committee, he played an instrumental role in guiding Kent State to a successful 2021 Lift For Life event.

We are proud of each one of these outstanding individuals for their service to the Rare Disease Community in partnership with Uplifting Athletes and recognize each nomination is well deserved.