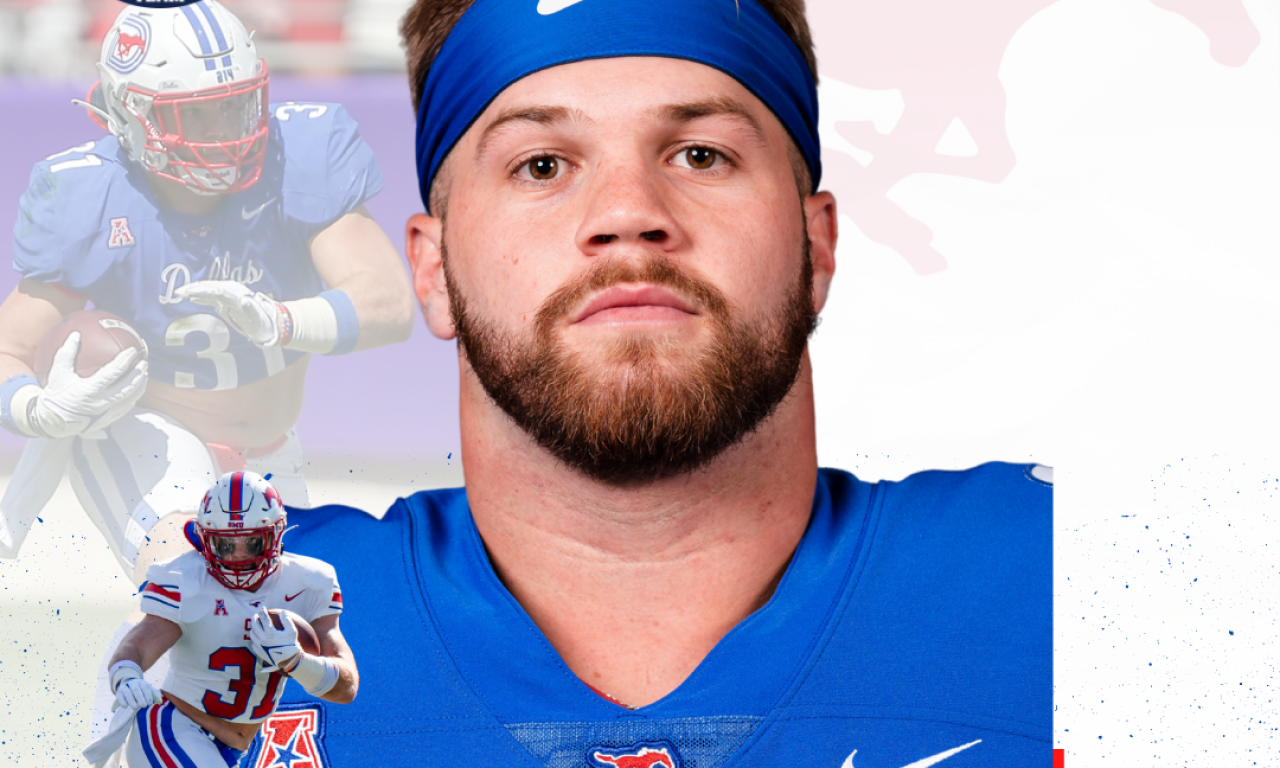 Get To Know Tyler: Going to the United State Military Academy at West Point wasn’t Tyler’s first choice out of high school, but going to West Point might have saved his life. The summer of his second year, Tyler broke his foot in basic training, the second time he broke the same bone in that same foot.  and During a routine physical it was noted he listed chest pains.  An EKG revealed he had the rare heart condition Wolff-Parkinson-White Syndrome, which if left untreated can be fatal. … Tyler was sent home from the Academy for a year to have heart surgery and recover. During that year he chose to leave West Point and bet on himself, enrolling and walking on at SMU. … After one season on special teams and limited snaps at running back, Tyler earned a scholarship prior to the 2020 season. … A two-time American Athletic Conference All-Academic selection, Tyler has more than 700 career yards of offense with six touchdowns in three years at SMU. … He was a 2020 Burlsworth Trophy nominee. … Tyler appeared in all 12 games in 2021, notching a career-high in catches with 10, scored three touchdowns and totaled nearly 400 yards of offense.

Tyler Lavine is a big fan of energy drinks and pre-workout powder and for about six months he figured the combination of the two, in his mind, was the reason he experienced chest pains and could literally see his heart pounding when he worked out.

He kept what in his mind was a non-issue to himself and looking back now, Tyler knows he was extremely fortunate.

If it wasn’t for breaking his left foot as a senior in high school, then re-breaking the same bone in the same foot again during basic training prior to his second year at the United States Military Academy at West Point, the rare heart condition that was exposing itself to Tyler when he worked out might never have been discovered.

After breaking the bone the second time, during a follow-up exam on his foot, one of the doctors noticed he listed chest pains as something he was experiencing. They ordered an EKG, then a second EKG and finally a third one.

Tyler had no idea what was going on, but he knew once they ordered a third EKG there was a problem.

“It all happened so fast and was really shocking to me,” Tyler said. “After the third EKG I saw the assistant pull in the doctor and they were talking and then both of them came over to me.”

What they told Tyler was he had a rare fatal heart condition called Wolff-Parkinson-White Syndrome and that he could not stay at West Point, he needed to call his parents and get home immediately to have surgery.

Wolff-Parkinson-White Syndrome is a condition that causes the heart to beat abnormally fast for periods of time because of an extra electrical connection in the heart. Patients are born with the condition and symptoms don’t generally develop until later in life.

“It hit me so fast and I was very confused,” Tyler said. “My first thought was can I ever play football, then I remember thinking what does my future look like? All this stuff was going through my head and I really didn’t really know what it was I had or what they were talking about.

Tyler returned to Texas immediately, had successful and potentially life-saving heart surgery and his recovery was routine. He was working out again within weeks. But for the first time in more than a dozen years he didn’t play football that fall. It was a massive adjustment period for Tyler.

He knew going back to West Point wasn’t an option because he would have been required to start over after being away for a year. Tyler knew he had plenty of football in him, but finding a place to play was going to be difficult at best.

An old high school coach, Chris Ross, helped clear a path for Tyler to walk on at SMU in 2019 and, fully healthy, he contributed right away on special teams. He bet on himself, and that paid off, when he earned a full scholarship prior to the 2020 season.

“That first season without football was rough. I honestly felt like a nobody and had no idea what I was going to do,” Tyler said. “I did have a different perspective on life, though, so I was able to take some time to relax, reflect and come up with a plan. I believed in myself.

“I’m so blessed to be where I am today. And I know if I had not gone to West Point, I would not be at SMU today.”

“There’s a lot of life lessons learned from a road that isn’t a straight line. This heart disease could have derailed me. But you can’t let something like a rare disease overpower your passion, why and hope for your life. If you love something, do everything in your power to stop on your terms, don’t let anything get in the way of the hope you have for your life.”