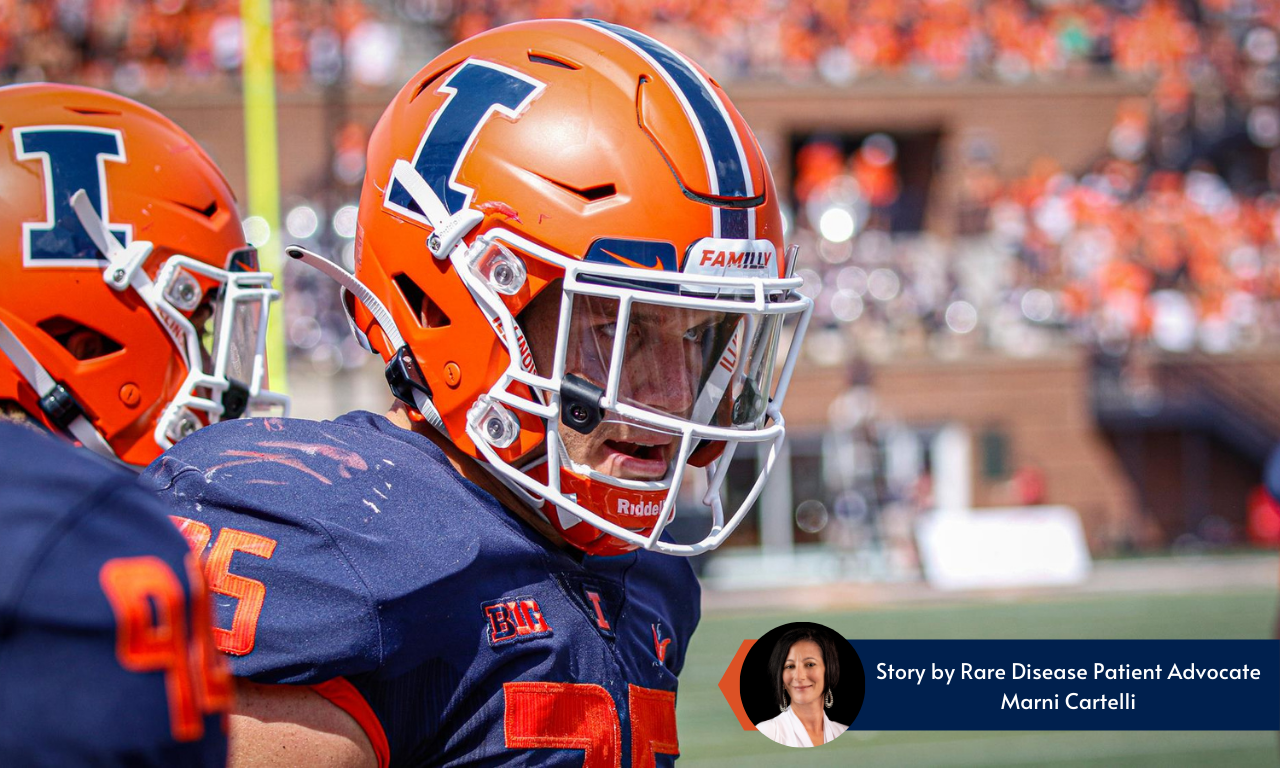 Sitting down with former Illinois linebacker and NFL hopeful Jake Hansen, two things grab you right away. First, his family means everything to him, and second, Jake would rather learn about the struggles of the Rare Disease Community than focus on anything he accomplished on a football field.

His numbers and accomplishments as a Big Ten Conference starting linebacker are attention grabbing, though. Jake finished his career with 276 tackles, 28.5 TFLs, seven forced fumbles, seven fumble recoveries and three interceptions. These stats take on new meaning when you factor in the numbers of games Jake missed because of injuries.

It is in his journey back from multiple severe injuries, any one of which could have robbed Jake of his NFL dream, where parts of his story begin to parallel that of rare disease patients.

After a promising first collegiate season, Jake’s sophomore campaign came to an abrupt halt in 2017 when he suffered an ACL tear in training camp. Jake looks back on that first major roadblock in his career and admits he struggled mentally with the setbacks he faced during his rehab.

“Yeah, everyone knows what recovery from an ACL should be like but nobody prepares you for what it will be for you,” Jake said. “There is no way to prepare yourself for those setbacks because you can’t possibly know. We only know what we know.”

He leaned heavily on support from his family and used the guidance of a former teammate who had already walked the ACL recovery road to help answer those unknown questions.

When Jake’s world went from focusing on whatever he wanted to and became about his medical plan he unknowingly got his first glimpse into what living with a rare disease is like. When his recovery did not go as routine as the textbooks described, he reached out to his teammate for support, Jake again followed a path that the Rare Disease Community walks.

“When I was unsure about how my knee was feeling it reassured me to be able to reach out and ask someone that went through it,” Jake said. “Sometimes getting out of bed seemed impossible or a whole PT session, overwhelming.”

The Rare Disease Community thrives by learning from one another’s shared experiences. There is however a stark difference between Jake’s situation and that of rare disease patients. Jake might have a resource pool of several immediate friends with first hand ACL experience. He probably also has dozens of trainers, coaches and doctors at his disposal to help. In the Rare Disease Community, we might find a dozen people in the whole world who even know about our condition.

Jake used another tactic the Rare Disease Community does to not get overwhelmed by the enormity of his situation. “I focused on small things like five minutes of rehab,” Jake said. “If I could do that then I would focus on the next five, and so on. I didn’t understand why if I could walk, I couldn’t run? I was very frustrated.”

To say the Rare Disease Community can relate to feeling frustrated seems like an understatement. There is no single aspect of a rare disease patient’s life which couldn’t be described as frustrating. If the diseases themselves aren’t the source of the frustration, the fact that society isn’t built to accept and include those of us with complex medical conditions is.

Jake found out that not all physiology responds the same way when he did not heal as quickly as he hoped. Some rare disease patients find this out in the exact same way. Others find this out after they are misdiagnosed or labeled in disparaging terms because their disease presents itself with different symptoms than other people with the same condition.

The rare community understands the importance of focusing on support, learning from shared experiences, and finding the smallest win and celebrating it. Those are tactics it uses to navigate some of the difficulties patients and families face. Jake might not personally have been touched by a rare disease, but he certainly shares the same mindset as the community he is supporting as he pursues his NFL dream.

Introduced to Uplifting Athletes by former Illinois Chapter President and now Super Bowl Champion Nick Allegretti, Jake always participated in chapter events. When the opportunity to personally represent the Rare Disease Community with his NFL Combine performance came about, Jake jumped at it.

“Uplifting Athletes is such a great organization,” he said. “And I wanted to use this moment to give back. I hope I can inspire the Rare Disease Community.”

Jake didn’t know it then but does now that his three major injuries and subsequent struggles actually provided him more insight into the rare disease patient experience than he realized.  We both endured fights against our bodies, mentally and physically, in order to get 1 percent better than we thought possible. Rare disease patients are fighting for our health. Jake was fighting for a chance to live out his dream and play in the NFL.