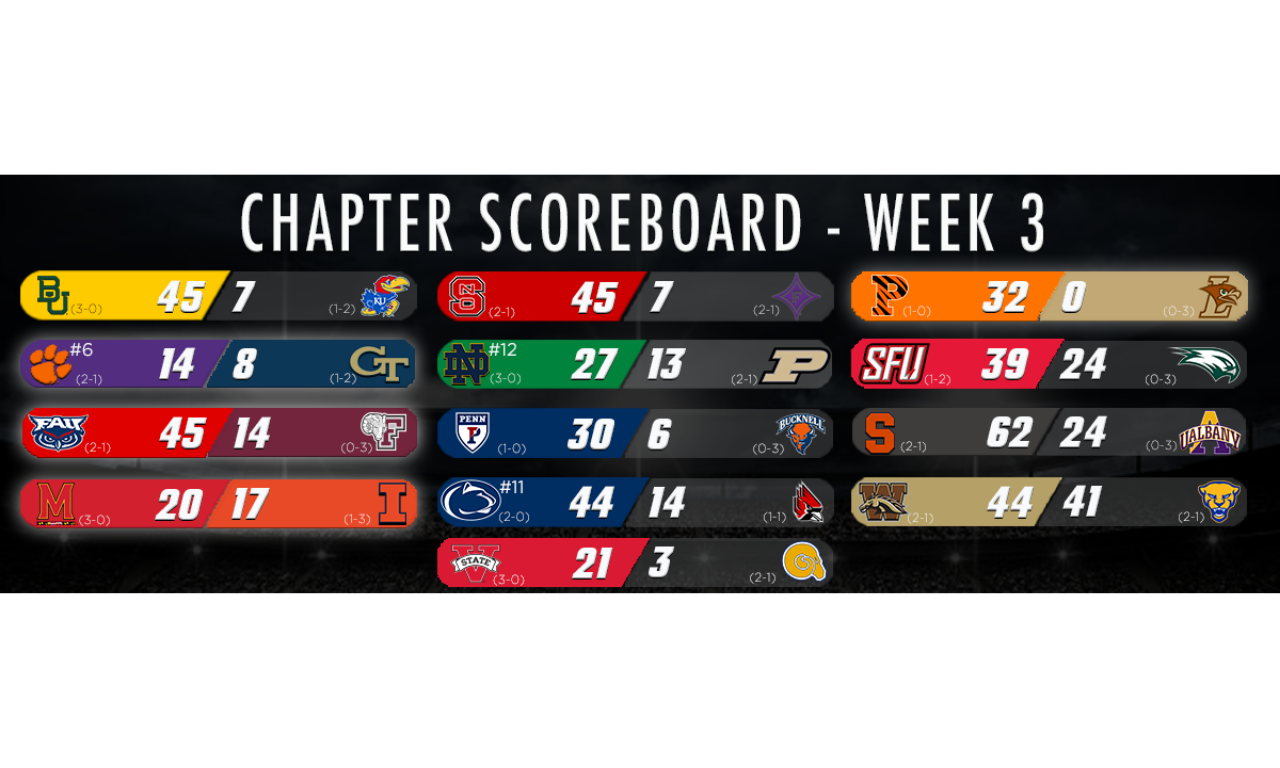 Western Michigan went on the road and pulled off a major upset, besting Pitt at Heinz Field behind a defense that produced three turnovers and an offense that amassed 44 points and 510 yards of total offense.

It was the first win over a Power Five Conference school for fifth-year Broncos head coach Tim Lester. Sophomore quarterback Kaleb Elby had a season-high 337 yards passing with three touchdowns. Sophomore wide receiver and Pittsburgh-area native Skyy Moore had a career-high 11 receptions for 124 yards and a touchdown.

Penn State: The Nittany Lions bumped up to No. 6 in the polls after knocking off two ranked teams in three games by edging Auburn in the annual White Out in front of 109,958 at Beaver Stadium, the ninth largest crowd in stadium history. Former Penn State Chapter President, quarterback Sean Clifford, completed 85 percent of his 33 passes for 280 yards and a pair of touchdowns. Star wideout Jahan Dotson had a career-best 10 catches and the Nittany Lions defense made two late-game stands to hold the Tigers off.

Maryland: Trailing fellow chapter school Illinois with less than five minutes to go in the fourth quarter, Maryland rallied for a dramatic road victory to stay perfect at 3-0. The Terps scored twice in the final 2:13 to continue their best start of a season since 2016. Joseph Petrino delivered  his first-ever game-winning field goal with a 32 yarder as time expired. Illinois Chapter President, offensive lineman Alex Palczewski, made his 44rd career start for the Illini.

Princeton: Playing football for the first time in 665 days, the Tigers offense didn’t miss a beat with QB Cole Smith throwing for 412 yards and three touchdowns on the road against fellow chapter school Lehigh. The Princeton defense not only pitched a shutout, but limited the Mountain Hawks to less than 100 total yards.

Syracuse: Freshman running back Sean Tucker stole the show in the win over Albany, as the 'Cuse offense gained 623 total yards and averaged 9.44 yards per play (second most in program history). The second-year freshman back amassed the second-most touchdowns in a single game by any player in program history (5), trailing just the great Jim Brown (6; 1956) and is the first player in program history to have 100-plus rushing (132) and receiving yards (121) in a single game. Redshirt junior kicker Andre Szmyt set the program record for most career field goals with a pair of makes. Szmyt’s 60 converted field goals surpasses Cole Murphy’s previous mark of 59 and earned him the Uplifting Athletes’ Rare Performance of the Week.

Notre Dame: The Fighting Irish came up with enough timely offensive fireworks and a solid performance from its defense to remain unbeaten with a victory over Purdue. Notre Dame Chapter Vice President, linebacker JD Bertrand, tied a career high with 12 tackles against Purdue for his third straight game with double-digit tackles. He is the first Irish player to have double-figure tackles in three straight games since Alohi Gilman in 2018.

Round-Up: Baylor reeled off 31 unanswered points in the second half to overwhelm Kansas on the road in the Bears’ Big 12 opener. The Bears amassed 307 yards on the ground and averaged 6.8 yards per carry. … Clemson needed some late game heroics to hold off fellow chapter school Georgia Tech in order to notch the Tigers’ 30th consecutive home victory.  Clemson Chapter President, long snapper Jack Maddox, handled all the snap duties on special teams and Chapter Vice President, punter Will Spiers, dropped three of his four kicks inside the 20-yard-line. Clemson’s defense stopped the Yellow Jackets at the 2-yard-line inside the final minute to preserve the six-point victory. … Florida Atlantic won its 10th in a row at home by outscoring fellow chapter school Fordham 31-7 in the second half to pull away. Fordham Chapter leaders, offensive linemen Ryan Joyce and Lucas Portes, each started up front for the Rams. … NC State overpowered Furman with 505 yards of offense to improve to 2-0 at home. NC State Chapter leader, wide receiver Anthony Smith, had three catches for 52 yards including a 42-yard touchdown grab. … Saint Francis picked up its first win of the season on the strength of a 33-point second-half explosion to power past Wagner in the Northeast Conference opener for the Red Flash. … Penn knocked off Bucknell for the eighth consecutive time dating back to 1999 and marked the Quakers’ return to the football field for the first time since 2019. Penn Chapter leader, linebacker Brian O’Neill, started and made two tackles. … Valdosta State rode four turnovers from its defense to hold off previously unbeaten Albany State to improve to 3-0.