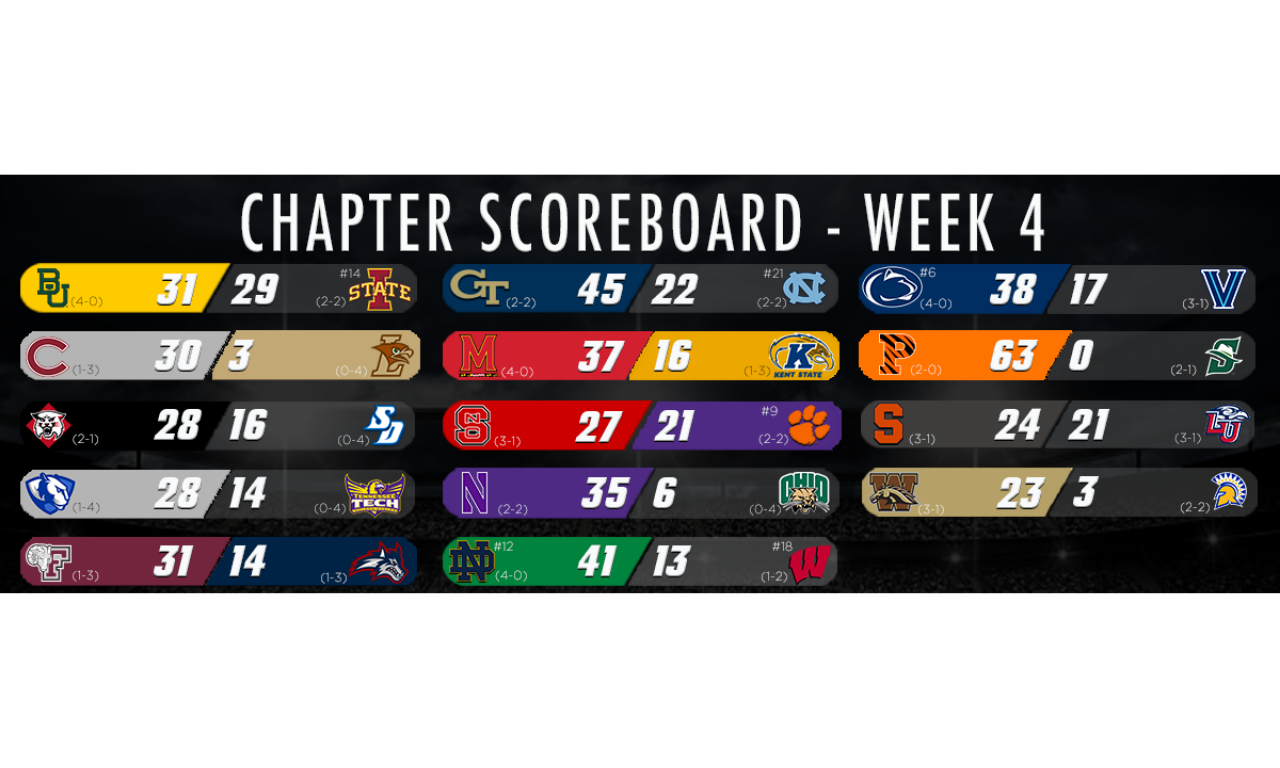 NC State turned the status quo in the ACC upside down, recording the Wolfpack’s first victory over a top-10 team in nearly a decade by edging fellow chapter school and previously No. 9 ranked Clemson in double overtime. The last time NC State defeated a team ranked inside the top 10 was 2012.

It took an exceptional outing from quarterback Devin Leary (four touchdown passes), a career best 14 catches from wide receiver Emeka Emezie and a defense that limited the Tigers to the fewest yards in this matchup (214 total yards) since 1994.

Clemson Chapter Vice President, punter Will Spiers, averaged 42.8 yards on eight punts, registered three kicks of 50 or more yards and dropped one inside the 20-yard-line.

Georgia Tech: One week after coming perilously close to knocking off a ranked opponent, the Yellow Jackets delivered when opportunity came calling for the second time in a row. Quarterback Jeff Sims rushed for 128 yards, threw for another 112 with four total touchdowns to spearhead their convincing victory over North Carolina. Tech’s defense forced three turnovers and limited the Tar Heels to only 63 rushing yards.

Penn State: Using a big-play offense, the No. 6 Nittany Lions raced to a 35-point lead after three quarters to secure a win over previously undefeated FCS opponent Villanova in the first meeting between the Pennsylvania schools since 1951. Former Penn State Chapter President, quarterback Sean Clifford, became only the second quarterback in program history to throw for 400 yards in a single game and tied a career best with four touchdown passes. Three of those four TD tosses covered 50 or more yards.

Baylor: In a wild game that came right down to the wire, the Bears improved to 4-0 by edging No. 14 Iowa State by two points when JT Woods picked off a two-point conversion attempt in the dying seconds to seal the victory. The last time the Bears defeated a ranked team was 2015. Trestan Ebner’s 98-yard kickoff return for a score just past the midway point of the third quarter, the third of his career, gave the Bears a two-score lead and just enough breathing room to hold on.

Notre Dame: The Fighting Irish exploded for 31 fourth-quarter points to pull away from Wisconsin in a matchup of ranked squads in Chicago. With the win, Notre Dame head coach Brian Kelly surpassed Knute Rockne for most wins all-time in Notre Dame history with 106. The Irish used a 96-yard kickoff return by Chris Tyree and pick-six interceptions by Jack Kiser and Notre Dame Chapter President, linebacker Drew White, to highlight the fourth-quarter explosion. It was the first time since 2002 against Stanford that the Irish had two interceptions returned for a touchdown in the same game. Notre Dame Chapter Vice President, linebacker JD Bertrand, led the Irish in tackles for the fourth straight game with eight stops.

Maryland: The Terrapins are 4-0 for the first time since 2016 and quarterback Taulia Tagovailoa continued his torrid start to the season with 384 passing yards in a victory over fellow chapter school Kent State. Tagovailoa now has 1,340 passing yards this season, the most for Maryland to start a season since Scott Milanovich threw for 1,607 in 1993.