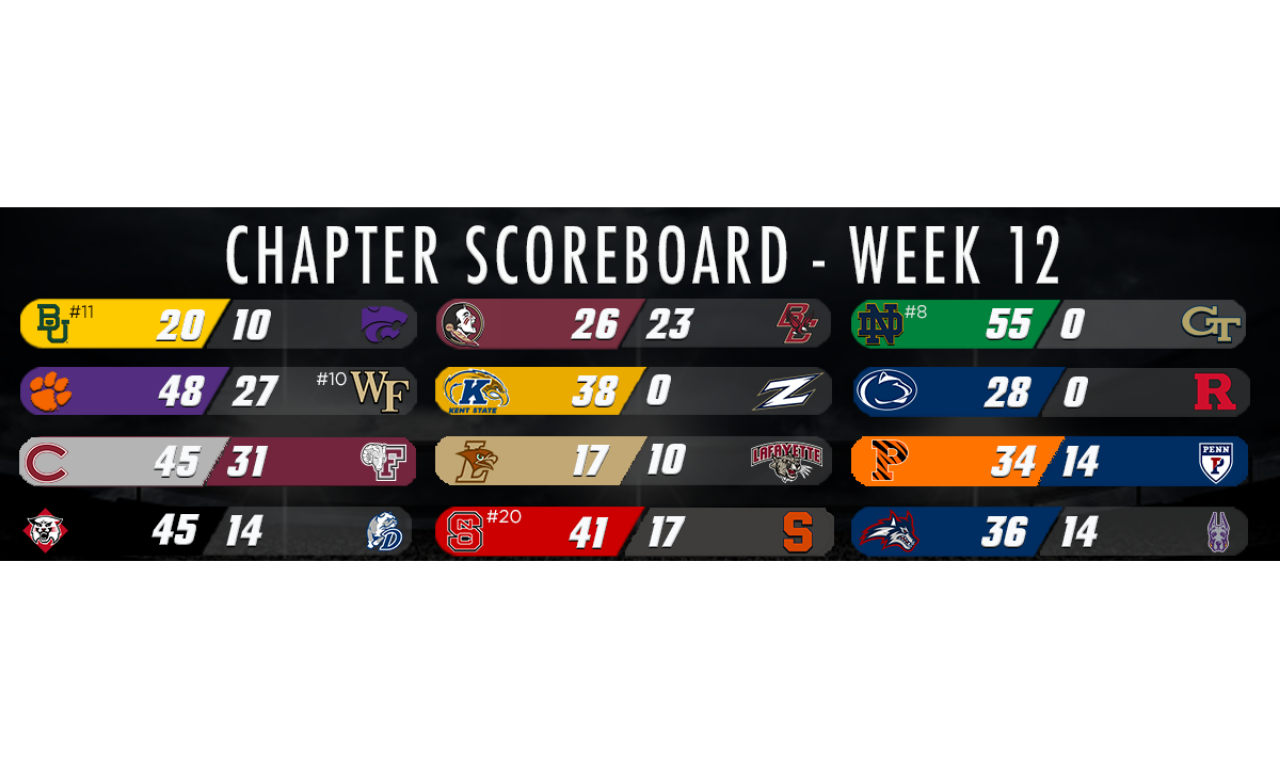 Kent State overpowered rival Akron with more than 400 yards on the ground to claim the Wagon Wheel game, posting the Golden Flashes first shutout of the Zips since 1949. The victory makes Kent State bowl eligible for the second time in three seasons and would be only the fifth bowl-game appearance in program history. The Golden Flashes used a pair of 100-yard rushers and defense that limited Akron to fewer than 200 total yards, posting its first shutout since 2009. Kent State and Miami (Ohio) will square off in the regular season finale to decide the MAC East crown.

Princeton: The Tigers secured a share of the 2021 Ivy League title with Dartmouth by holding off fellow chapter school Penn. With the win, Princeton secured at least a piece of its fourth Ancient Eight title in the last eight seasons. Matthew Winston highlighted a 28-point second quarter for the Tigers with a 34-yard interception return for a touchdown that made it 17-7. Penn Chapter President, linebacker Brian O’Neill, capped his stellar career with six tackles for the Quakers to finish with more than 200 career tackles.

NC State: After more than 20 minutes of scoreless football, the Wolfpack and fellow chapter school Syracuse combined for five touchdowns in the final six minutes of the first half. NC State scored four of those to take control. NC State’s Zonovan Knight returned a kickoff for a touchdown for the second consecutive week and became the first player in NC State history to record three kickoff returns for a touchdown in their career. Syracuse freshman running back Sean Tucker, broke an Orange record that stood for 42 years, becoming Syracuse’s single-season rushing leader by surpassing Joe Morris’ 1979 season of 1,372 yards. Tucker earned Uplifting Athletes’ Rare Performance of the Week honor.

Davidson: The Wildcats made it back-to-back Pioneer Football League championships to earn a second straight NCAA FCS playoff berth by running past Drake. Davidson had nearly 600 yards of total offense including 470 on the ground. Next up for the Wildcats is a road trip to Georgia for an NCAA playoff opener against Kennesaw State. The Wildcats and Owls are the Nos. 1 and 2 ranked FCS rushing offenses, respectively, in the country averaging a combined 624 yards a game on the ground.

Penn State: For the first time since the Nittany Lions joined the Big Ten in 1993 they shutout two conference opponents in the same season by blanking Rutgers on Senior Day. Former Penn State Chapter President, quarterback Sean Clifford, was recognized as one of 32 Nittany Lions playing their final home game. He left the game with an injury early on and his replacement, freshman Christian Veilleux, threw for 235 yards and three touchdowns. Penn State’s defense limited Rutgers to 160 total yards and the Scarlet Knights punted on each of their first 10 possessions.

Clemson: The Tigers won their fourth in a row, using a suffocating defense to slow down No. 10 ranked Wake Forest on Senior Day. The Tigers’ defense recorded 10 tackles for loss, seven sacks, broke up 10 passes and forced three turnovers. Clemson Chapter President, long snapper Jack Maddox, and Vice President, punter Will Spiers, were recognized for playing their final game at Memorial Stadium. Clemson kicker B.T. Potter nailed his sixth career field goal ,covering 50 or more yards on a snap from Maddox to take over sole possession of the school record, shared previously with Chris Gardocki (1988-90) and Donald Igwebuike (1981-84).

Round-Up: Backstopped by a defense that has been holding the opposition well under their season scoring average the last month, Baylor muscled up just enough offense to double up Kansas State. The 10 points surrendered to KSU by the No. 11 ranked Bears were 19 points below their average. Bears senior RB Trestan Ebner played in his 58th game to break wide receiver Chris Platt’s program record for career games played that was established in 2019. He also tied the record for career catches at Baylor by a running back with his 120th reception. … Colgate won its third in a row to finish 6-6 overall and 5-1 in the Patriot League by knocking off fellow chapter school Fordham. The Raiders and Rams combined for nearly 1,000 total yards and 86 points, but it was the five turnovers created by the Colgate defense that was the difference maker. Colgate Chapter leader, defensive back William Gruber, tied for the team lead in tackles with six, had a fumble recovery and broke up a pass. … Florida State had a season-high 11 tackles for a loss and used a late interception to hold on against Boston College on the road. … Lehigh won its third in a row after starting 0-8 and closed out the season by edging rival Lafayette in the 157th meeting of college football's most played rivalry. Lehigh Chapter leader, quarterback Dante Perri, threw for 183 yards and a touchdown. … No. 8 ranked Notre Dame set a program record with its fifth consecutive 10-win season by shutting out fellow chapter school Georgia Tech. Notre Dame Chapter President, linebacker Drew White, played his final game at Notre Dame Stadium and finished with four tackles including a half sack and tackle for loss. … Stony Brook won its 200th game in program history and made sure the Golden Apple stayed in the Wolves Den by knocking off Albany at home. Stony Brook Chapter leader, offensive lineman Kyle Nunez, started up front for a Seawolves offense that posted a season-high 36 points.