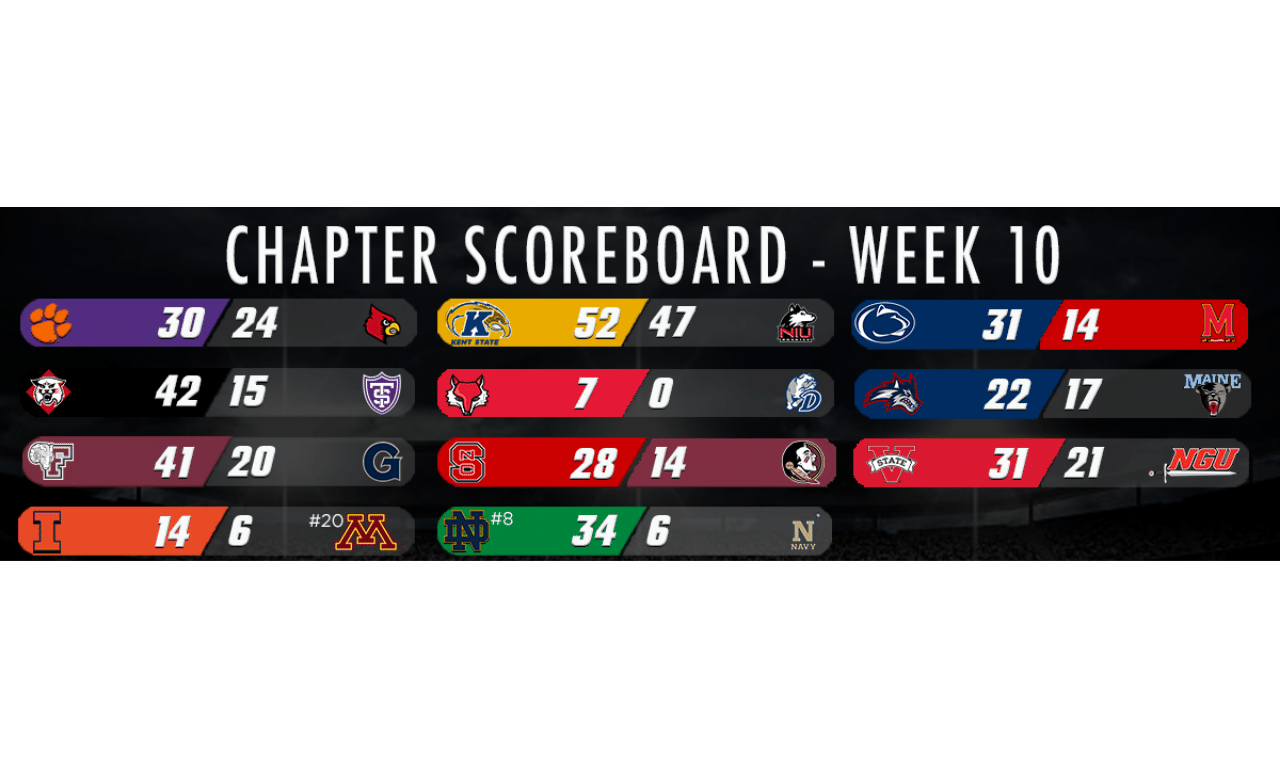 Fordham won for the sixth time in a row and used a strong defensive effort to remain unbeaten in the Patriot League by upending Georgetown in the 66th meeting of a series that dates back to 1889. The Rams defense limited the Hoyas to 108 rushing yards and recorded five tackles for loss to go along with four sacks. Fordham’s balanced offense produced its fourth 500-yard game of the season. Fordham Chapter leaders, offensive linemen Lucas Portes and Ryan Joyce, started up front for the Rams.

Penn State: Senior wide receiver Jahan Dotson had a record breaking career day for the Nittany Lions to hold off fellow chapter school Maryland. Dotson  set the Penn State single-game receiving record with 242 yards, breaking Deon Butler's record of 216 set in 2006 and earned the Uplifting Athletes’ Rare Performance of the Week honor. Dotson also tied career highs with 11 receptions and three touchdowns, and he is the only FBS Power 5 receiver this season to record 240-plus yards and three touchdowns in a single game. His 86-yard catch-and-run early in the fourth quarter was the longest pass play of the season for the Lions and put Penn State ahead for good. Terps quarterback Taulia Tagovailoa was 41-of-57 for 371 yards and a touchdown. His 41 completions are the second-most in a game in school history and the 57 attempts are tied for the third-most in a game in school history.

Lehigh: The Mountain Hawks tasted victory for the first time this season, using an all-around effort to subdue Bucknell on the road. Lehigh more than doubled up the Bison in total yards (408-170) and the Mountain Hawks defense had three interceptions, three sacks and limited Bucknell to only 14 yards rushing. Lehigh Chapter leader, quarterback Dante Perri, threw for 244 yards to help the Mountain Hawks snap a 15-game losing streak.

Illinois: For the second time in three weeks, the Fighting Illini knocked off a ranked Big Ten opponent on the road with its upset victory at Minnesota. Defense was again at the heart of a big win for the Illini. The victory was the first for Illinois against a team ranked in the College Football Playoff Top 25. The Illini defense limited Minnesota to fewer than 100 rushing yards, had six sacks, nine tackles for loss and used a late game interception in the end zone to seal the deal. Illinois Chapter President, offensive lineman Alex Palczewski, made his 50th career start, extending his Illini record for career games started. Illinois Chapter Vice President, tight end Michael Marchese, caught a pass for 15 yards.

Davidson: Sparked by a running game that piled up nearly 400 yards, the Wildcats won their seventh in a row and are 6-0 in the Pioneer Football Conference for the first time. Davidson was 12 of 16 on third down and converted both its fourth-down attempts. Safety Brian Jacobs made a pair of fourth-quarter interceptions to keep the visitors from Minnesota off the board down the stretch.

Round-Up: Top 10 ranked Notre Dame improved to 8-1 overall and won for the fourth time in a row thanks to a defense that limited Navy to fewer than 200 total yards and only 18 passing yards. Defensive lineman Kurt Hinish had a career-high 10 tackles and Notre Dame Chapter Vice President, linebacker JD Bertrand, added nine stops to bring his team-high tackle total to 80. … Marist recorded its first win over Drake in nine meetings, and the Red Foxes did it with flair by posting their first shutout since 2013. The lone touchdown came on a 10-yard pass from QB Austin Day to RB Hunter Cobb late in the third quarter. The 7-0 final was Marist’s lowest scoring game since 1988 when the Red Foxes lost 3-0. … The Clemson defense made no fewer than four goal line stands to allow the Tigers to rally from behind to edge Louisville. The Tigers’ D came up with four straight stops inside the five to secure the win. The Cardinals had first and goal at the two-yard line with 1:18 to play, but Clemson’s defense didn’t budge as they stopped the Cards on fourth-and-goal from the one-yard line for the second time. Clemson Chapter President, long snapper Jack Maddox, handled the snap duties for all five punts and on three successful field goals. … Stony Brook won for the third time in a row after winning only once in its first seven games and picked up the Seawolves' first CAA road win of the season at Maine. Stony Brook Chapter Vice President, offensive lineman Kyle Nunez, started up front for the Seawolves, who sprinted to a 16-0 lead early in the second quarter. … Kent State beat Northern Illinois for the first time since 2001 and won its eighth straight home game in knocking off the Huskies in a wild MAC outing that saw the teams combine for 1,345 total yards and 99 points. … East Tennessee State moved to 8-1 overall by rallying in the dying minutes to score a touchdown with nine seconds remaining to edge Furman in a defensive battle. … Valdosta State stayed unbeaten by scoring 21 second-quarter points and eclipsing 500 total yards of offense for the fifth time in nine games.