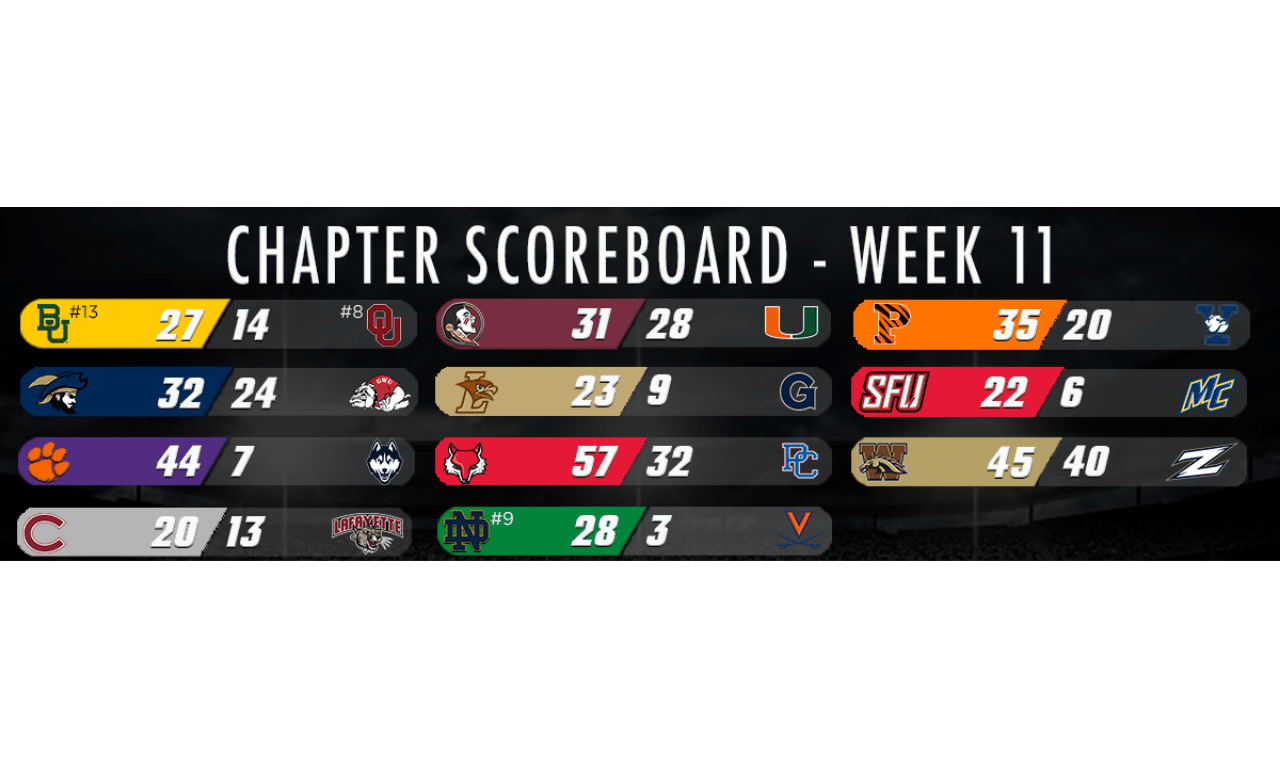 Defense has quietly been a force for Baylor all season and the Bears’ D came up with another stellar performance to shut down previously unbeaten and Top 10 ranked Oklahoma. In posting its first victory in Waco against a team ranked inside the Top 10 since 2014, the Baylor defense limited the Sooners to 14 points, 260 total yards, 2 of 9 on third down and produced a turnover for the 18th straight game. Quarterback Gerry Bohanan had the first 100-yard rushing game of his career and RB Abram Smith also eclipsed 100 yards as the Bears beat Oklahoma for the first time since 2014.

Western Michigan: The Broncos saw a 14-point fourth-quarter lead evaporate, then rallied in the dying final couple minutes to vault past Akron on Senior Night. Running back Sean Tyler finished with 147 yards and a touchdown on the ground, two catches for 25 yards with a touchdown, and returned a kickoff 96 yards for a touchdown. He is the only Bronco to score a touchdown three different ways in a single game in at least the last 25 years and earned the Uplifting Athletes’ Rare Performance of the Week honor. Western Michigan Chapter President, linebacker Zaire Barnes, led the Broncos with eight tackles, including seven solo, and a fumble recovery. WMU Chapter Vice President, safety Jake Moertl, had five solo tackles.

Clemson: The Tigers defense stole the show in the first-ever meeting against Connecticut, holding the Huskies to less than 100 total yards, only 1.9 yards per play and for the fourth time in 10 games the Clemson defense did not surrender a touchdown to the opposing offense. Clemson’s offense put up nearly 350 yards through the air and 13 different receivers registered at least one catch. Clemson Chapter President, long snapper Jack Maddox, helped clear the way on a 6-yard fake field goal for a touchdown by holder Will Swinney in the first quarter that put Clemson ahead for good. Clemson Chapter Vice President, punter Will Spiers, dropped two of his five kicks inside the 20-yard line.

Marist: The Red Foxes scored 37 unanswered points in the second and third quarters on the way to the second-most points scored in a game as a Division I program and the most in 23 years. The Red Foxes defense forced six turnovers, the most since 2013, including five interceptions. Marist Chapter President, safety Paul Olivett, had his first career interception to go along with a pair of solo tackles.

Notre Dame: The Irish defense continues to shine, limiting the nation’s top rated offense of Virginia to only 278 yards and keeping the opposing offense out of the end zone for the second consecutive game. Notre Dame had a season-high seven sacks, added eight tackles for a loss and had a pair of interceptions. Notre Dame Chapter Vice President, linebacker JD Bertrand, had four tackles.

Round-Up: Freshman kicker Alex Schmoke etched his name in Saint Francis football lore by tying the single-game program record with five made field goals in a game. Lance Geesey established the mark in 2015. Four of Schmoke’s kicks came in the first half as the Red Flash built a 19-0 cushion. … Colgate freshman quarterback Michael Brescia ran for 178 yards in his first start under center for the Raiders. His 178 rushing yards is the most by a quarterback since Gavin McCarney also ran for 178 in 2012 against Fordham. Brescia’s 2-yard run with less than 90 seconds remaining was the difference on the scoreboard and gave the Raiders their second straight win. … Florida State jumped out to an early three-score lead then had to rally with 11 points in the final five minutes including a touchdown in the dying seconds to rally past in-state rival Miami. Noles QB Jordan Travis scored on a 1-yard plunge with 26 seconds to play on the heels of completing a do-or-die fourth and 14 to Andrew Parchment trailing 28-23. … Lehigh Chapter leader, quarterback Dante Perri, threw for 259 yards and a pair of touchdowns to lead the Mountain Hawks to their second victory in as many weeks. Lehigh’s run defense made the Hoyas one dimensional by limiting them to only 33 rushing yards on 27 carries without a single carry covering 10 or more yards. … Princeton bounced back from its first loss of the season by twice rallying from behind to overpower Yale and the Tigers remain tied for first with Dartmouth at the top of the Ivy League table with one week remaining. Princeton QB Cole Smith threw for 273 yards and three touchdowns and also led the Tigers in rushing with 79 yards. … Running back Danuel Oscar had a career-high 101 yards to help Charleston Southern record its first double-overtime victory since 2016. The Buccaneers surrendered a touchdown in the final minute to force OT, then went out and scored in both extra sessions.