Big man with a big heart, Dillan Gibbons takes serving others to the next level 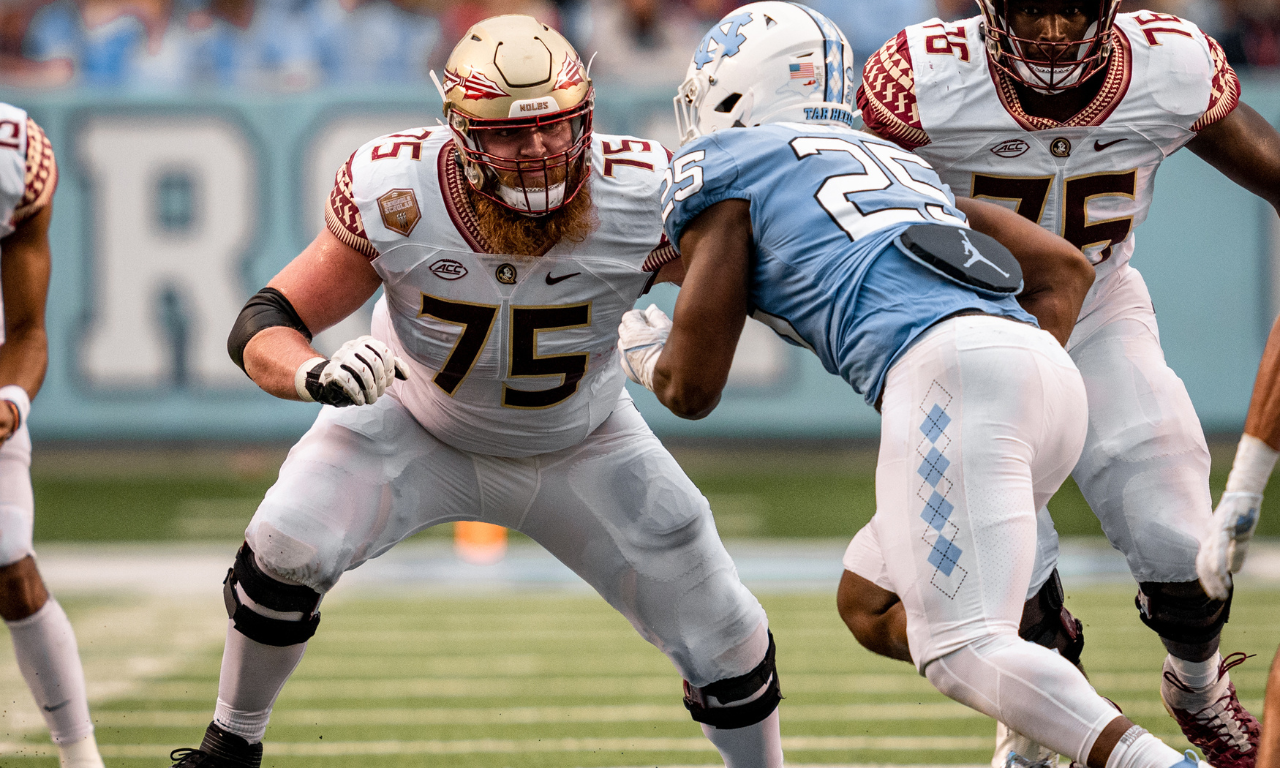 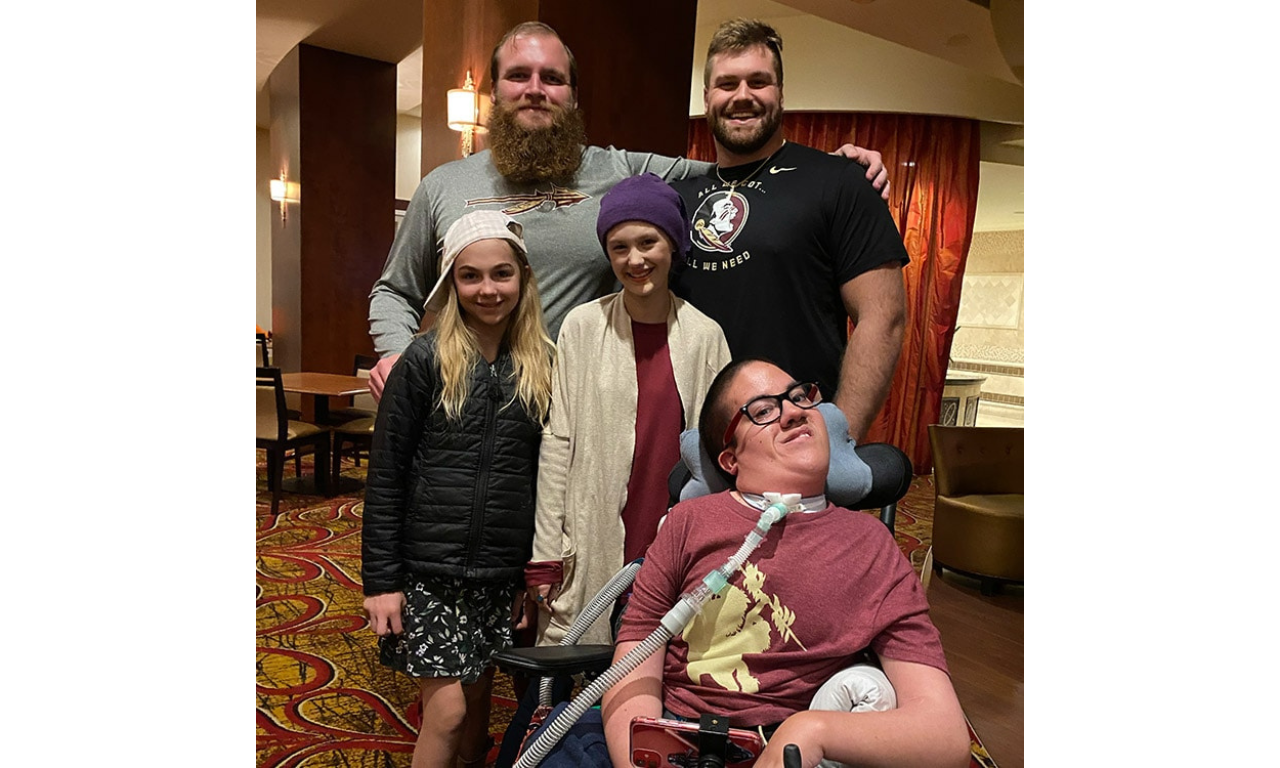 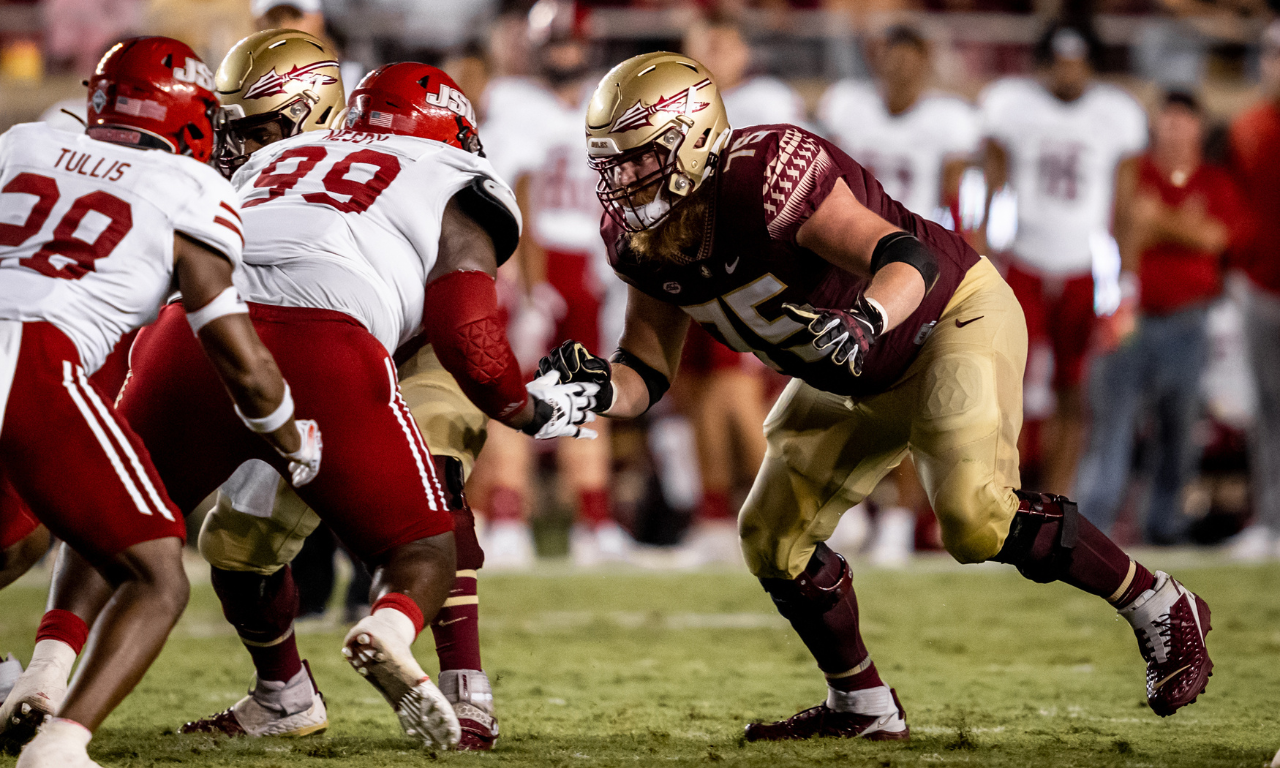 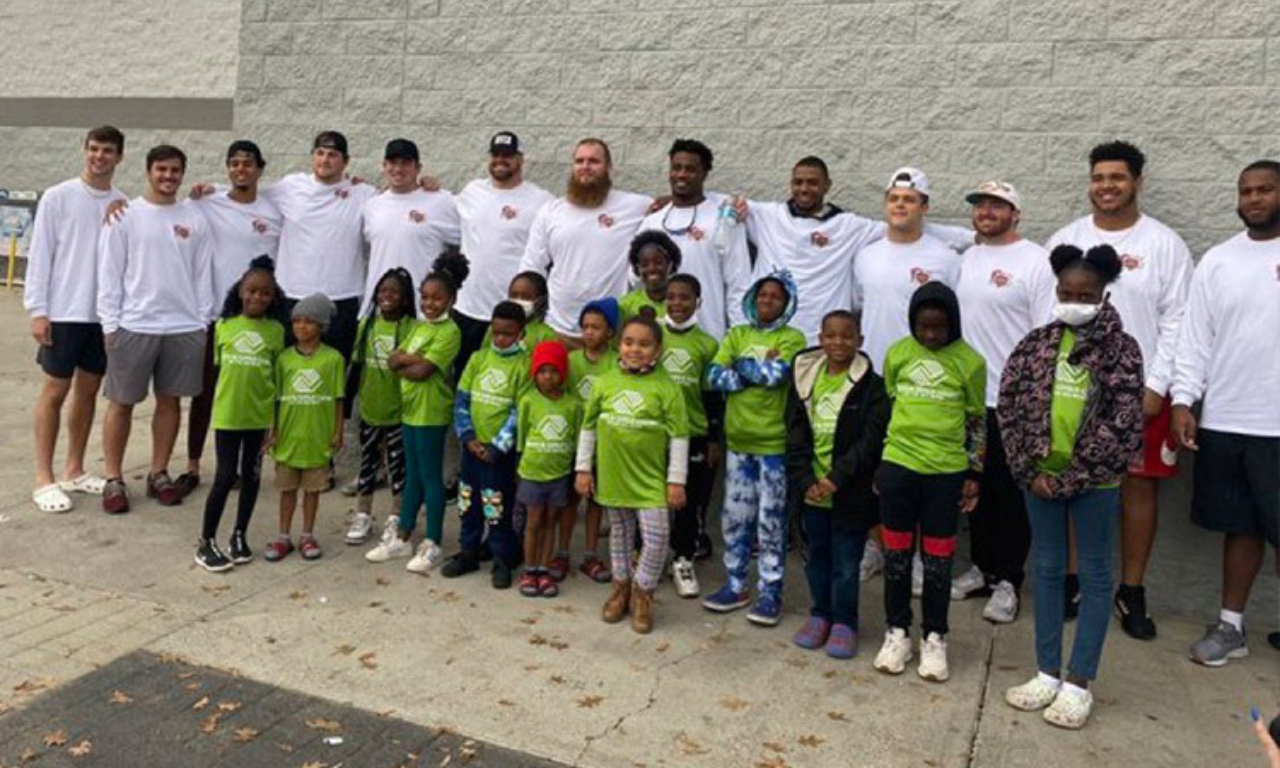 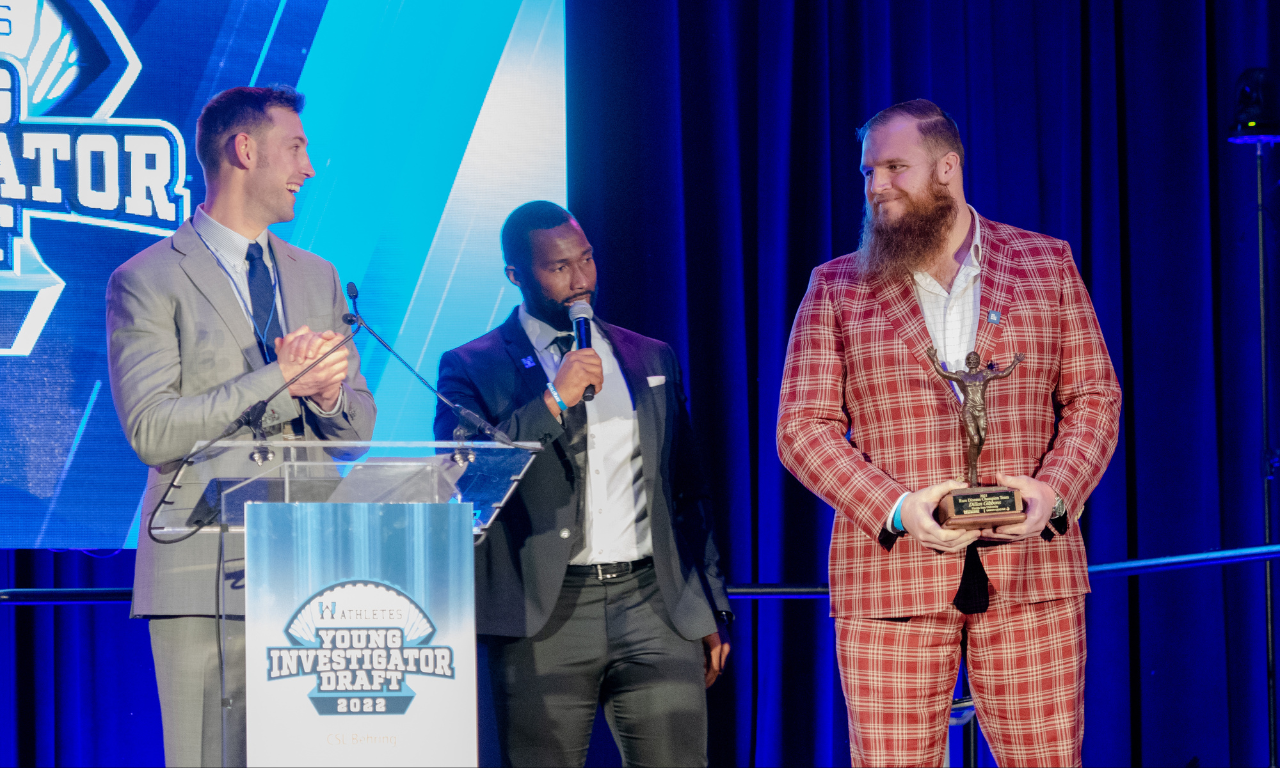 Dillan Gibbons has always cared deeply about others. It was a gift his parents modeled for him as a child.

It started for Dillan in Kindergarten, and nearly two decades later not a lot has changed for the towering 6-5, 330-pound starting left guard for Florida State. He wears his big heart on his sleeve, cares deeply about others and serving people still moves and drives him.

When Dillan started Kindergarten, he made sure that gift from his parents was packed along with his lunch money and his crayons.

In addition to his school supplies and new clothes, Dillan required an additional purchase for that first year of school. He took a medical kit and turned it over to his teacher just in case. He did that at the beginning of each school year until he finished elementary school.

“I didn’t want to see anybody get hurt and not be able to help them. I grew up watching my parents helping people and that has impacted me greatly to this day,” Dillan said. “In my mind, if we had a medical kit in class and somebody got hurt, we had a way to help them.”

In so many ways, the standout offensive lineman for Florida State, who transferred from Notre Dame after getting his degree in Management and Consulting from the prestigious Mendoza College of Business, is still doing exactly what he did in Kindergarten. He’s doing everything in his power to help and serve others.

“The greatest joy in life, and this was instilled in me at a young age by my parents … I love helping people,” said Dillan, who is preparing for his final year of college football, finishing his MBA degree at Florida State and dreams of playing in the NFL. “My big heart is that medical kit, I guess. I want to share that medical kit with college football and the communities we serve. I have a burning desire to help people.” 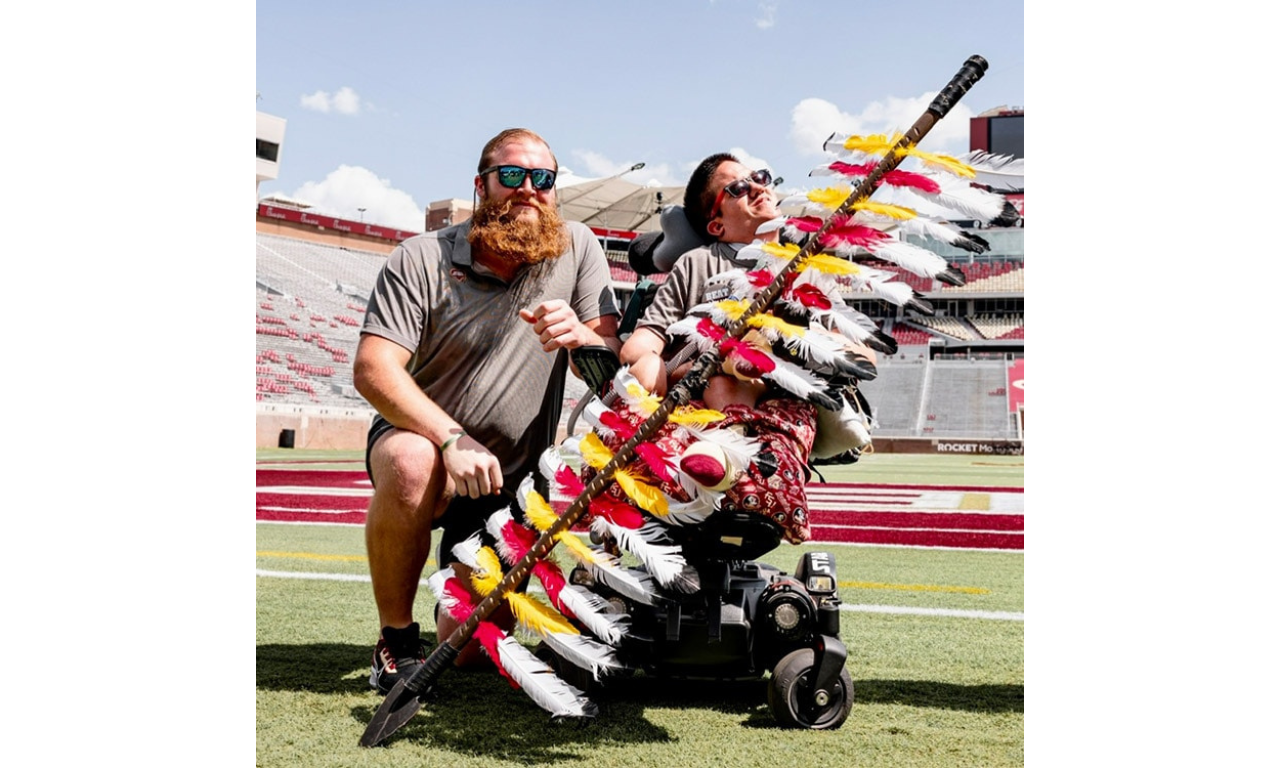 Dillan’s launching pad to the next level was his loving and deeply meaningful friendship with Timothy Donovan, a rare disease patient, and his family. The roots are tied to Notre Dame, but it was his first game for the Seminoles in 2021, against Notre Dame in Tallahassee, where their friendship became a national story.

Using his recently granted NCAA Name, Image and Likeness (NIL) abilities to make money, Dillan partnered with GoFundMe to start a fundraising campaign, called Take Timothy To Tally to help get his friend down to Tallahassee for the season opener with the Fighting Irish. What ensued was a firestorm of funds, national publicity and recognition, including being part of the 2021 Uplifting Athletes Rare Disease Champion Team.

Most importantly, though, it was a chance for a couple of buddies - Dillan and Timothy - to experience something special together.

Notre Dame beat Florida State that night and eventually the firestorm surrounding that moment died down. The nearly $90,000 raised has served Timothy and his family well. They have not only been able to travel to the FSU v. ND game, but attended three other FSU games last season and are planning to attend five games next fall.  In addition, they were able to make essential modifications to their home to better accommodate Timothy and purchase a Hoyer lift and a new wheelchair accessible van – which will carry them safely and comfortably to FSU and Notre Dame games next season.  But, this was only the beginning for the big man with the big heart.

This experience showed Dillan the power of football and what that power could do for others. It was again time to bring out the medical kit, because Dillan had ideas floating around in his head and on documents in his laptop. The fire was lit. And he wanted to bring others along for the ride.

Dillan said that the childhood medical kit is the “core of all this. It’s sort of a metaphor for life. Helping people is rooted deep in my psyche. Timothy and that experience opened the floodgates.”

Dillan put all those dreams and ideas he formed during his years studying business at Notre Dame into action by creating his own 501(c)(3) non-profit called Big Man Big Heart, Inc.

The foundation’s name ties right back to Dillan, but the mission and goals go much deeper. This isn’t about Dillan at all.

The mission of Big Man Big Heart is to promote NCAA college athletes’ use of their NIL to do good and promote unity, positivity and kindness in their communities and beyond. It’s about people and their stories and people helping people.

“I’m an offensive lineman and I know nobody cares about me on the football field until I jump off-sides or give up a sack. I’ve never had to humble myself. I realize how insignificant I am. I didn’t name this after myself because of that,” Dillan said. “Even in my position, I’ve been able to multiply what I’m doing with my platform. Think of what those superstars out there who already have a much bigger platform or social media following can do on their own if they understand and get to know and learn what I already know …  helping people matters. So I’m looking to inspire others and give them the tools they need to put their NIL to work for good.”

Big Man Big Heart has raised over $325,000.00 in less than a year and has signed eight additional NCAA Collegiate Ambassadors who have joined up to make their NIL dollars serve and help others. Each ambassador has their own platform, person or cause they are championing. Every fundraiser has a compelling story and Dillan and his team help to tell that story.  The recipients of these fundraisers have told Dillan that the donations mean so much more to them than the financial support. The flurry of donations make them feel seen, loved, appreciated, included, and uplifted. Giving that to someone in need is priceless.

Dillan continues to inspire others and add more stories to the Big Man Big Heart library. There’s the long-time girlfriend of former Notre Dame teammate and old friend, Green Martini, who was recently involved in a horrific accident. “Football Family For Laura Fisher” has raised more than $72,000 to help Laura get through this difficult time and assist with her loss of income and over $600,000 in medical expenses. Two of his Florida State teammates, quarterback Jordan Travis and fellow offensive lineman Brady Scott, have teamed with Dillan to impact the lives of others.

“I’m looking to help others understand college football and the power of it a little better. That's all. I’m not trying to get a new car or anything like that. I’m trying to change the narrative of what NIL is about and enlighten people on the potential of what can be done with NIL. I’m trying to create that positive environment in our locker room and make that shine in other locker rooms across college football. One shining light in each locker room who helps his community or supports a cause near and dear to his heart. If I can in some way help provide that … that’s what I want to be a part of.”

Sometimes timing is everything. The education and connections Dillan established at Notre Dame are the roots of Big Man Big Heart. They are valuable assets at his disposal and are serving him well. But, it was his transition to Florida State and the new mentors and contacts he made in Tallahassee that fueled and inspired him to make this dream a reality.

He admits that if he was still playing at Notre Dame, none of this would be possible. When he first arrived at Notre Dame Dillan, for the first time since Kindergarten, he left his metaphorical medical kit at home. He wasn’t willing to risk being his true and authentic self as a freshman offensive lineman at Notre Dame. He had too much on his plate. In the classroom, Dillan sharpened and honed not only his business acumen, but focused on core tenets such as faith, service, learning and hard work. 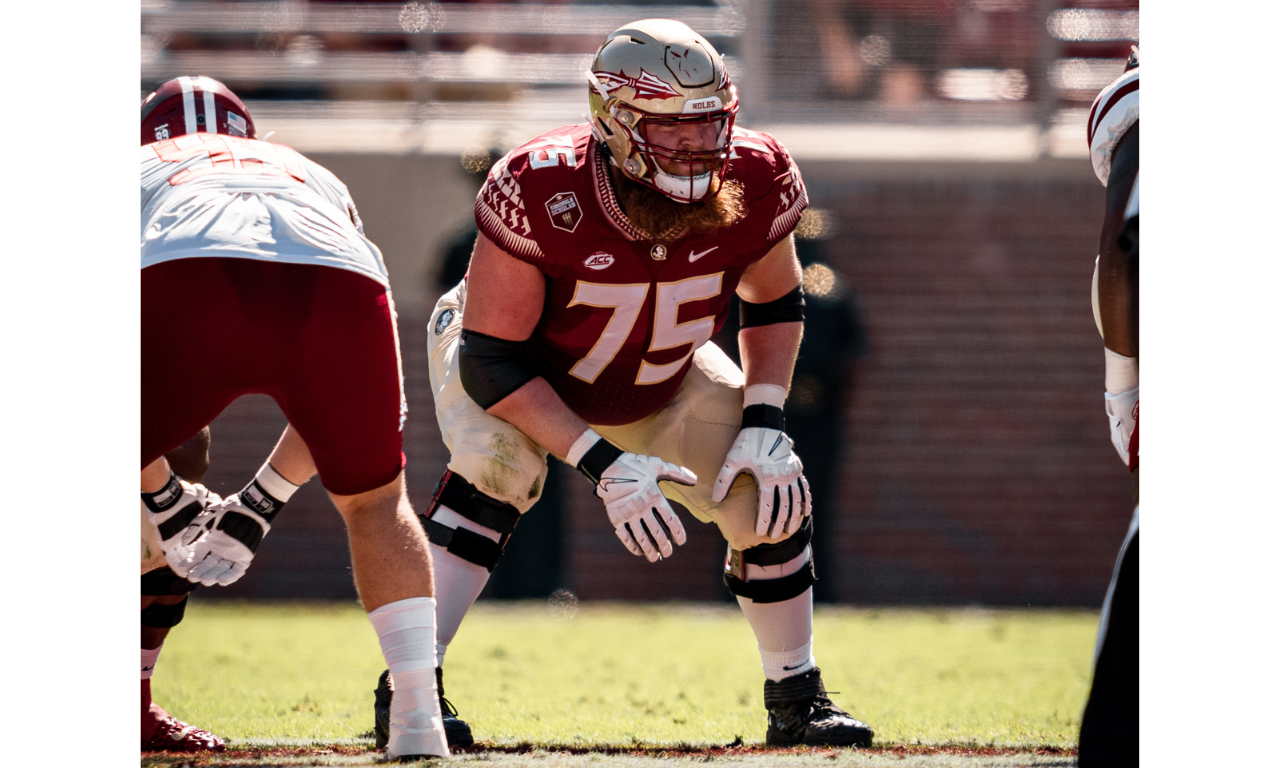 Not being true and honest with himself and holding back his selfless servant passions had a profound impact on Dillan. The fire inside was still burning, but he kept what he would reveal low-key. Over the course of four years at Notre Dame, Dillan realized that simply didn’t work for him.

Instead of writing his thoughts and ideas down, he needed to be taking action to fulfill his desires to serve and help others. His friendship with Timothy was rattling the chains of using that childhood gift from his parents. It was time for a change.

Dillan didn’t transfer to Florida State prior to the 2021 season to start a nonprofit and land on a national stage. He went back to his home state of Florida to have a better shot at chasing his own football dreams.

“I was still able to help people at Notre Dame, but I could never imagine doing something like what I have done with Big Man Big Heart. Notre Dame is a faith-based education, but some of the barriers in place there for me were difficult,” Dillan said. “Although I took courses about non-profit business management, I couldn’t have started a non-profit or a company like this at Notre Dame because of the strings attached to being a Notre Dame football player. What Notre Dame taught me through my education was invaluable and it’s because of that I have the knowledge and foresight to understand the business world and run my own successful non-profit while working towards my MBA degree and playing football at the highest collegiate level.”

It’s been less than a year since Dillan, his big heart inside a big man, landed on the national stage. Helping and serving others comes at a cost and it’s a price the Seminoles starting guard is more than willing to pay, but every day is difficult.

He continues to adjust his priorities and schedule to make sure he doesn’t get caught with too many eggs in one basket. He admits he’s become more selfish with his time and that has paid huge dividends on the football field.

And that’s important because Dillan knows the impact of what he can accomplish becomes greatly diminished if he loses his football platform. It doesn’t mean his passion or fire goes away, but the platform of football matters.

He has a team of interns helping him, his brother, attorney and former college football player at Stanford and South Florida, Reilly Gibbons is providing more hands-on help with the day-to-day operations of Big Man Big Heart.

Most importantly, his dream of playing in the NFL provides the biggest and most powerful platform in not only football, but all of sports.

“I’ve had to learn to be more selfish with my time … I’ve compartmentalized my life into 15-minute blocks to help me better manage my time and set goals.   Everything for Big Man Big Heart is contingent on the platform of football. I have football dreams for me. This is now a part of those dreams,” Dillan said. “You can’t help everybody and that’s tough for me. I’ve had thousands of people reach out to help them out. What you can do with this platform of college football is to help as many people as you can- to get their story out, help them financially if possible, tell their story and be a source of inspiration for them daily.

“That’s the power of the platform of football.”